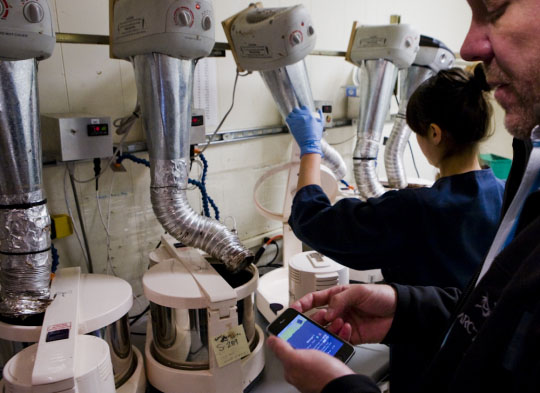 Is it possible to be a Game Changer and to be a chocolate maker? Or is it even possible to be a Game Changer by making chocolate?
Usually we know chocolate sold in bars, and in varieties like milk, dark or white. Special flavoured chocolates might contain nuts or fruit. Nothing game changing about that. At San Francisco’s TCHO, the common concept of chocolate was taken and turned on its head. TCHO comes in pots of daily doses, like pills, and it’s all pure black chocolate, with different tastes according to the beans used. Much like coffee.
But there’s more: TCHO is probably the world’s most technology-obsessed chocolate company. At TCHO’s technology meets chocolate in a way never seen before. Or do you know any other chocolate makers who control their chocolate production from anywhere in the world by tapping on their iPhone? Well, I don’t.
The Techie Chocolate was born in 2005 when former Space Shuttle coder Timothy Childs, and founding editor of Wired Louis Rossetto set up TCHO together with chocolate industry veteran Karl Bittong. Their mission: to reverse-engineer chocolate and make the perfect bar.
They started from the very first beginning and revolutionised the traditionally uneven fermentation process. Growers often had to guess how long to leave beans fermenting which led to differing states in taste. By using a modified weather-monitoring system and controlling the temperature inside the piles of beans on their Macs, Childs and Rossetto were able to solve this problem. Thanks to their digital and technical knowledge.
The first chocolate was produced in December 2007 and the Chocolate Scientists were desperate for feedback. But normal market research wouldn’t do. Instead, they issued beta-version chocolate bars wrapped in US Air Force weapons-grade packaging which indicated how much TCHO would come to reject the traditional romanticism of the chocolate industry. The bars, with names such as „Beta C Ghana 0.21″, were put up for sale on TCHO’s website at $5 each and sold out almost instantly. At the end of 2008 the company launched ist first v1.0: „TCHO Chocolatey“.
A special focus was set on the way chocolate was marketed and on differentiationg from the usual. A scientific way of speaking about flavour that would be immediatelly understood by consumers was born. And with it the TCHO „flavour wheel“: Chocolatey, Nutty, Fruity and Citrus.
You see, TCHO is different. And it is innovative. Each chocolate company runs a laboratory to work out new varieties, but only TCHO runs a „TCHO flavour lab“: Mixers, originally designed to grind spices in Indian restaurants, temper cocoa paste and are connected to heaters from Costco. There’s tape from a Space Shuttle programme and a modified turkey oven roasting cocoa beans. And everything is connected to an ethernet node with its own IP address.
Give TCHO a try and see post-digital-revolution guru Louis Rossetto live as a speaker at next10. As co-founder of Wired magazine and with his obsession for building great businesses and creating products he knows the talk. And maybe he’ll bring some chocolate with him…