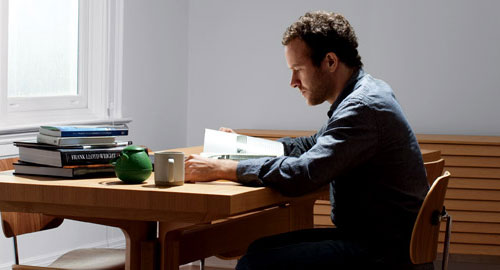 I usually get to work between 10 a.m. and 11 a.m. Of the 16 people at the company, eight of us live here in Chicago. Employees come to the office if and when they feel like it, or else they work from home. I don’t believe in the 40-hour workweek, so we cut all that BS about being somewhere for a certain number of hours. I have no idea how many hours my employees work — I just know they get the work done.

I spend most of my day writing. I write everything on our website. Communicating clearly is my top priority. Web writing is terrible, and corporate sites are the worst. You don’t know what they do, who they are, or what they stand for. I spend a lot of time taking a sentence and reworking it until it’s perfect. I love the editing process.

In the software world, the first, second, and third versions of any product are really pretty good, because everyone can use them. Then companies start adding more and more stuff to keep their existing customers happy. But you end up dying with your customer base, because the software is too complicated for a newcomer.

We rarely have meetings. I hate them. They’re a huge waste of time, and they’re costly. It’s not one hour; it’s 10, because you pulled 10 people away from their real work. Plus, they chop your day into small bits, so you have only 20 minutes of free time here or 45 minutes there. Creative people need unstructured time to get in the zone. You can’t do that in 20 minutes.

Very rarely is a question important enough to stop people from doing what they’re doing. Everything can wait a couple of hours, unless it is a true emergency. We want to get rid of interruption as much as we possibly can, because that’s the real enemy of productivity.

Launches are the most hectic times, because so many things will go wrong. But the cool thing about Web-based software is you can update things in real time. If something is broken, we can fix it in three seconds, hopefully. But as we get bigger, small problems become bigger faster. Every move you make now is magnified, especially with launches. An announcement that might upset a few people today will upset a few hundred tomorrow. I spend a lot of time responding to that.

We don’t have big, long-term plans, because they’re scary — and they’re usually wrong. Making massive decisions keeps people up at night — I don’t like to make those. The closer you can get to understanding what that next moment might be, the less worried you are. Most of the decisions we make are in the moment, on the fly, as we go.